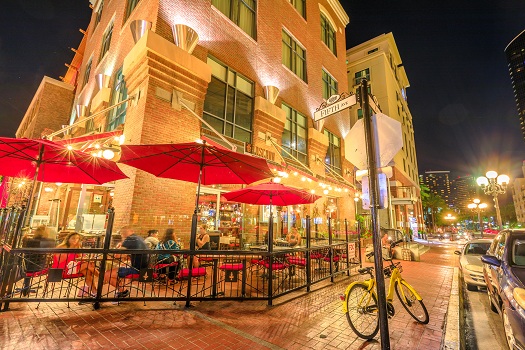 San Diego may not officially be “the city that never sleeps,” but it’s absolutely a place where you can get out and about in the evening. If you have plans to visit SD soon and you want to know where to go when you find yourself craving a bite after the sun goes down, there are many options to consider. Keep reading to discover some of the best spots in the SD area for eating and drinking at night.

One of the most active spots for nightlife in San Diego, the Gaslamp District is home to an assortment of late-night food options. For instance, Werewolf, one of the most popular food-related hangouts you’ll find here, is open until 2 a.m. on Friday and Saturday and until midnight on certain weekdays. If you’re in this part of San Diego for a weekend visit, another late-evening dining possibility is GARAGE Kitchen + Bar, which specializes in “new American fare.” Other Gaslamp District eateries offering late-night hours include:

• Patrick’s Gaslamp Pub – Known for its live music and affordable drinks and food, this place is open until 2 a.m. daily.
• Gaslamp Tavern – This sports bar known for its delicious sandwiches and craft beers is open until 1 a.m. on Friday and Saturday.
• Prohibition Lounge – Prohibition is a throwback speakeasy that serves up highly recommended cocktails daily until 1:30 a.m.
• Gaslamp Pizza – This popular eatery provides pizza by the slice, subs, and other tasty delights until 2 a.m.

With some downtown San Diego dining options, “late-night” means being able to make dine-in reservations later in the evening, such as after 8–9 p.m. For example, Oyster & Pearl Bar Restaurant is open until 9 p.m. For a more unique and equally palate-pleasing experience, Gyu-Kaku Japanese BBQ is open until 10 p.m. for your dining pleasure. Some other restaurants that have later hours and are located close to downtown hotels in San Diego include:

• Water Grill San Diego – A top-rated seafood destination in the heart of downtown SD that stays open until 11 p.m. on Friday, Saturday, and Sunday.
• Buca di Beppo – An authentic Italian restaurant that’s open until 10 p.m. on Thursday, Friday, and Saturday and 9:30 p.m. on other days.
• The Lion’s Share – For a more exotic bite to eat, make your way to this downtown SD destination until 12 a.m. most days, except for Friday and Saturday, when it’s open until 2 a.m.

You’ll also be able to eat later in the evening at certain spots in some of San Diego’s other neighborhoods and communities. For example, Bencotto in Little Italy offers artisanal Italian eats, classic desserts, and other treats later into the evening on Friday and Saturday. In Old Town, Casa de Reyes offers later-evening outdoor dining in a beautiful garden, with later hours also on Friday and Saturday. Rockin’ Baja Lobster is another Old Town eatery with later hours where you can go for lobster and other seafood dishes or tacos after the sun sets.

With such a variety of culinary delights to choose from in San Diego, you’ll want to stay for a while, so reserve your room today at Sunrise Inn San Diego. When they’re looking for comfortable and affordable cheap hotels, San Diego visitors will be amazed by our unbeatable rates as well as our spacious rooms, stunning views of the harbor, and proximity to the best dining options and most popular attractions in America’s Finest City. Call one of our friendly staff members today at (619) 223-5544 to make your reservation.