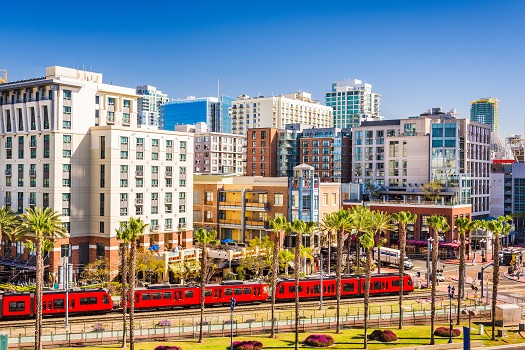 San Diego’s downtown is packed with exciting museums, gardens, shopping, and more. You’ll find the coolest things to do in the downtown area, where the attractions are within walking distance. The welcoming team from Sunrise Inn San Diego, one of the top San Diego hotels close to the downtown area, suggest these not-to-be-missed things to see in downtown San Diego.

Balboa Park, an urban oasis, is one of the city’s main attractions and home to the world-famous San Diego Zoo. At the Botanical Building, you’ll find a museum complex with themed gardens featuring orchids and tropical plants, a rose garden, a cactus garden, a Japanese Zen garden, and more. But the park is about much more than plants. You can attend a show at the Old Globe Theater and explore a variety of museums, including the Museum of Photographic Arts, the San Diego Museum of Art, the Mingei International Museum, the Fleet Science Center, and the Museum of Man. Art lovers shouldn’t miss the Spanish Village, a cobblestone plaza containing 37 art studios and galleries.

Lined with restaurants, bars, and clubs, the Gaslamp Quarter is a Victorian-era neighborhood and downtown San Diego’s social hub. It’s named for the gas lanterns that used to light the city’s streets. Along its 16 blocks, you’ll find everything from fine dining to all-night dive bars. Start your bar tour at the Marriott Hotel’s Altitude Sky Lounge, a rooftop bar on the 22nd floor. Get there right before sundown and sip signature cocktails while watching the town light up below.

Step back in time and explore the city’s Mexican heritage at Old Town San Diego State Historic Park, just north of downtown. The restored houses and shops are situated on the site of California’s first European settlement, which is often called the “birthplace of California.” You’ll get a glimpse of what life was like during the state’s different historical eras, from the arrival of Spanish explorers to the Gold Rush. The top places to see include the Whaley House, an old granary and courthouse built in 1857, the Casa de Estudillo, which was constructed in 1827, and the Junipero Serra Museum. You’ll also find shops selling Mexican and Latin American crafts and cafés serving authentic Mexican food.

Spend an afternoon browsing some of California’s best shops and galleries while watching ships coming and going in the harbor at Seaport Village, which is home to more than 50 shops and 13 eateries. Shop for eco-friendly products at Cariloha Bamboo, artwork at Wyland Galleries, and the latest trends in clothing at Seaport Island Fashion. Work up an appetite and take advantage of the village’s diverse food scene, dining on oysters at the Harbor House or authentic Mexican cuisine at Margarita’s Kitchen & Cantina. Seaport Village is also near the USS Midway Museum, another cool San Diego attraction.

There’s no shortage of fantastic ways to enjoy downtown San Diego. If you’re planning a vacation in the city and looking for comfortable but inexpensive hotels near downtown San Diego, you’ll be delighted by Sunrise Inn’s affordable rates as well as our spacious rooms, stunning harbor views, and wide variety of amenities, including refrigerators, microwave ovens, flat-screen TVs with digital cable, and complimentary WiFi. To learn more about our amenities or reserve a room, call one of our friendly team members today at (619) 223-5544.